Why did I choose this title for my book? 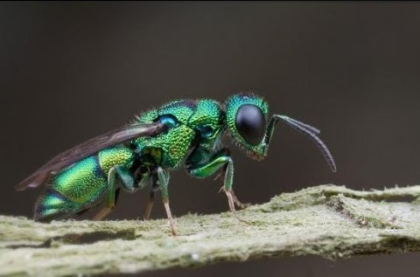 Humans are brainwashed with false beliefs in school, the family, society and religious places and etc. They control our brain system to move us in any direction that they want. This action is very similar to the way a particular type of wasp operates. This similarity is the reason I chose “You are hunted by the Jewel wasp” as my title.

What is a Jewel wasp?

The Jewel wasp – also known as the emerald cockroach wasp – is actually able to control the mind of a cockroach. Without this ability the cockroach, which is up to six times larger than the wasp, would definitely have the upper hand; once injected with venom, however, the cockroach is under the control of the wasp.

When she returns, the wasp bites off around half of each of the cockroach’s antennae, feeding on the fluids released to replenish her strength after her exertions; the poor zombified cockroach doesn’t even try to fight back. Being smaller in size, the only way the wasp can get the cockroach to its burrow is to get it to walk there, and it does this by biting on one of the half-eaten antennae, leading it along then guiding it inside. The cockroach, meek as a lamb, does the wasp’s bidding.

Once inside, the wasp lays an egg on the cockroach, then exits the burrow and seals up the entrance. After a few days the egg hatches, and the larva uses the docile cockroach as food, first chewing its way into the abdomen, then eating the internal organs, and finally creating a cocoon inside the cockroach from which it hatches several weeks later.

Jewel wasps are distinctive in appearance, with a metallic blue-green body and red legs, and are normally found in the tropical regions of Africa, South Asia and the Pacific islands. Jewel wasps mate only once, after which the female is able to produce several dozen fertilized eggs – leading to potentially several dozen zombified cockroaches.

While there are other parasites which control the behaviour of their hosts, the Jewel wasp is the only one known to inject venom directly into its host’s brain. It works by controlling the release of a neurotransmitter called octapamine, which performs a similar function to noradrenaline in humans. With that function disabled, scarily it’s not that the cockroach can’t run away, it’s that it chooses not to.

The Jewel wasp is one-of-a-kind, but there are other parasites that control their prey’s behaviour in several ways. Makes you wonder at how amazing-yet-scary nature is. 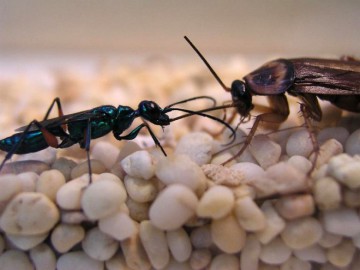 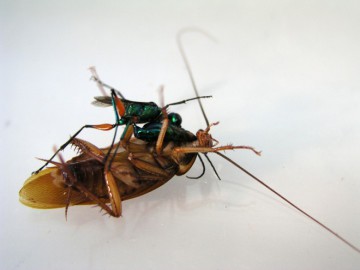 You can now order autographed book for only £39.99.

To order fill the form on Contact page and get your Special autographed book from Simon Proctor.